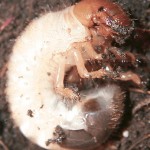 Grubs are the larvae of several species of beetles. Adult beetles don’t normally feed on grass but they sometimes cause damage to ornamental plants. Extensive damage can occur during the larval stage of the beetle’s development. In late summer, adult beetles lay their eggs in the lawn. When the eggs hatch, they turn into white grubs which tunnel into the soil and eat grass roots. They continue feeding until cooler weather forces them deeper into the soil where they spend the winter. In spring, they move back to the soil’s surface where they continue eating your grass roots until they emerge from the soil as an adult beetle. The cycle then repeats itself. Treating for grubs is a matter of proper timing. Effective control can only be accomplished if treated early in their development cycle. Once the grubs become full size (in early spring) it’s usually too late to control them. At Sunshine, we know the best time of the year to apply special controls that will eliminate turf damaging grubs from your lawn without harming other beneficial insects.

Adult weevils can be seen crossing sidewalks and driveways during late summer or spring. In spring and summer, adults cause minor injuries to grasses as the females cut small holes in the stems of plants and insert their eggs. The young billbug “grubs” are the primary damaging stage. Billbug grubs are legless, generally white or cream, with a brown head. They may reach 1/3 to 1/2 inch long when full-grown. ​ Young grubs feed within the crown area of the plant and kill it. The stems of infested plants are easily detached at the soil surface. The ends appear sawed-off, often with a sawdust-like material present. Older billbug larvae feed in the lower crown and plant root zone. Small piles of light sawdust-like material are produced during feeding. Billbug injury is most common on new lawns, particularly those established with sod. Within lawns, most damage occurs near evergreen shrubbery or other protective sites. Billbug injury appears as wilting and occasional death of grass, often in small scattered patches. Extensive areas of a lawn may be killed during severe infestations. 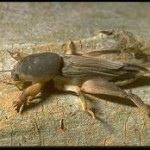 Mole crickets have front legs enlarged, shovel-like and modified for digging. Adults are cylindrical, nearly 1-1/2 inches long and dull brown. The shield-like segment just behind the head is marked with two pairs of pale spots. There are two finger-like projections on the terminal segment of the front leg separated by a U-shaped gap, and the hind tibiae is longer than the head. Adults have well-developed wings covering 3/4 of the abdomen when held at rest. They fly at night, can run quickly, but are poor jumpers. Nymphs resemble adults but are smaller and do not have fully developed wings. Mole crickets feed on grass roots, but their major damage comes from their movements through the soil. They tunnel near the soil surface with strong forelegs, loosening the soil and uprooting plants which dry out quickly. The insects eat at night an may tunnel as much as 10 to 20 feet per night. During the day, they return to their burrows. They prefer St. Augustine and zoysia grass for their main diet. Mole crickets are difficult to control because of their deep burrowing habits. A continuing program of treatments is required to keep these bugs under control. 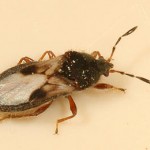 Adult chinch bugs are almost 3/16-inch long, have black bodies and fully developed wings that appear frosty-white except for distinctive triangular black patch-like markings at the middles of the outer margins. Adults appear as either long-winged or short-winged forms. Newly hatched nymphs appear orange red with a pale whitish band across their abdomens. As they molt through five growth stages, nymphs gradually change color from red to orange to black and develop wing pads as they develop.​ ​ Chinch bugs suck juices from grass plants. As they feed, toxins are injected into the plant. It takes numerous chinch bugs to damage a lawn, but they reproduce extremely fast. Populations of chinch bugs have been known to grow to over 1000 per square foot.​ They feed on grass growing in the full sun over shady areas. Adult chinch bugs are tiny and very easy to overlook. We apply a control that may require 2 applications for complete control.

Armyworm injury is similar to that of webworms; however, the damage is usually more scattered and not confined to patches as with sod webworm infestations. It is not unusual to have populations of armyworms, webworms, and other lawn caterpillars all feeding at the same time in the same location. Armyworms and loopers feed during the day and do not rest in a curled position while cutworms feed during the night and remain concealed during the day like webworms.​ ​ If conditions are right, armyworms can achieve very high populations in lawns and cause severe damage. The larvae damage turf by feeding on stems and leaves. Outbreaks of armyworms may occur over large areas. We apply a liquid application for immediate results. The most severe damage occurs when armyworms feed during the hot, dry weather when the lawn is under greater stress and less likely to recover from the damage caused. To prevent severe damage to your lawn, army worms must be treated as soon as they are noticed.

Fire Ants can be identified by their reddish color and small size (1/8 to 1/4 inch long). Most people identify them from their fiery sting that will result in a small bump or pustule on the skin. They will rapidly swarm the mound if it is disturbed in an effort to protect their queen. Fire Ants infest many different areas. They can be found anywhere where there’s an abundance of food which includes other insects, oil from seeds, meats, grease, or similar food sources. They liquefy the food and return it to the colony to feed their young and the queen. They go in search of food when temperatures reach 70 or more and can journey up to 100′ from their nest. Fire Ants cause other problems besides a nasty sting. Mounds that can reach more than 3. Nests built near a home may invade the home in search of food. Controlling Fire Ants is often a larger task than most homeowners can handle. This is especially true with extensive infestations. Worker ants build a complex of underground tunnels. If the mound is disturbed, they move the queen to another location and set up a new nest.